What is Survivorship bias? 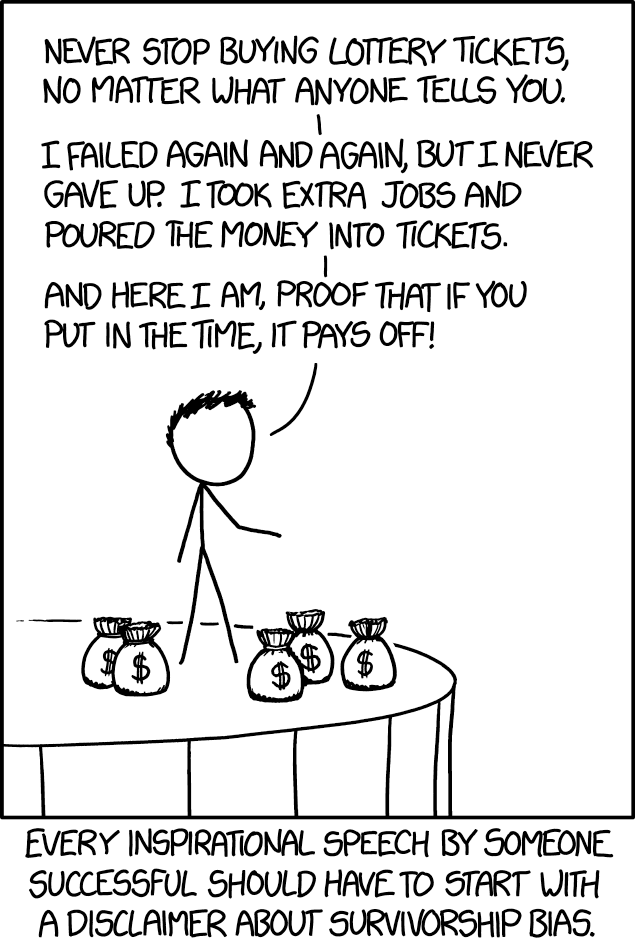 Examples in Business and Marketing

Drop out of college, become a billionaire

Bill Gates and Mark Zuckerberg dropped out of college and went on to become industry legends. Therefore, if you’re in college and working on a startup idea, you should drop out and pursue your idea full-time.

“How One Weird Marketing Tactic Led To 300% More Revenue”

You read a case study that presents incredible results based on A/B testing. Therefore, you conclude that you must also be A/B testing.

An inventor comes on Shark Tank with a weird idea. Mark Cuban tells him that it’s a terrible idea and it will have no market. The inventor replies, “Well, the Pet Rock was successful and everyone said that was terrible, therefore I should ignore you and dedicate my life to make this successful.”

WE LOVE TO focus on outliers.

Our brains are trained to spot novelty. Extremes are interesting. The middle of the bell curve is not interesting, since that’s where most of us are, and what we observe on a daily basis.

Most articles and content highlighting stories of success are written by journalists or marketers who are incentivized to get clicks and conversions. Failure cases of someone following a “winning” playbook are ignored. Nobody wants to read that.

Humans are narrative-driven. It’s hard for us to accept that luck is a real factor. We need to feel in control all the time. We want someone to just tell us what to do — it’s scary to realize “oh shit, I have to figure it out myself” and it’s comforting and reassuring to think there’s a “golden sequence” that we just have to follow.

How to deal with Survivorship Bias

Here are a few mental bugfixes you can use to avoid falling into the Survivorship Bias trap:

If you re-played the scenario, what are your chances achieving of the same outcome? How many people took the same advice, took the prescribed action, but failed anyway? Which outcome is likeliest?

Ask Why, not How.

Your job as a marketer is to be good at identifying causal factors. The wrong way to do this is to obsess about HOW things happened: the video that went viral, the Facebook Ads campaign that drove results. Not many people obsess about the WHY, which is more important for driving future causality.

All case studies, all company features, all celebrity biographies are biased and edited to show them in the best light. They have all been written with an agenda, either (a) to lionize the person/company or (b) sell something to you. There may be useful gems found in the work, but it’s rarely the tempting narrative they dangle in front of you.

No two people have the exact same kitchen. Therefore, if you are trying to achieve similar results, you have to study the directions being given to you, see whether you have enough of the same ingredients, then adapt it thoughtfully to your situation, accepting that the outcome is not going to be the same.

You can overthink Survivorship Bias.

Just remember that there ARE differences between consistent winners and consistent losers. The key is to study the track record.

Bill Belichick, who has kept the New England Patriots perennial Superbowl competitors for 2 decades, is clearly doing something right.

Your job is to identify the things that are responsible for producing the outcomes. Don’t blindly follow something just because successful person X did it. Does the narrative make sense?

If Bill says “I win because I kiss a Rabbit’s foot every night”, you would be silly to take that as the reason for his success.

But if Bill says “I win because I maintain an unnaturally high standard of performance, even during practice”, you’ll want to dig further.